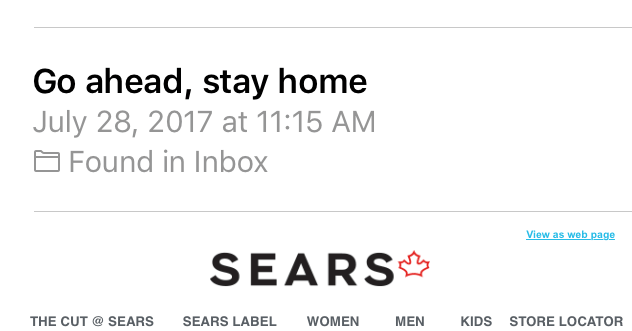 Is this the message Sears wants to send when customers are threatening a boycott?

Whenever a company is going through change or a hard time, I always advise everyone that, “Communications should look at everything before it is shared publicly.”

I get eye rolls and sniffs. I suspect people think that I’m being nosy and want control. But really, my goal is to support you and your message. Your brand is being actively attacked and you need to look at everything you do as a possible response or threat.

Here’s a great example. Sears Canada, one of our major retailers is going bankrupt. It’s a long slow journey, unlike when Target came in and pulled out in less than a year. Sears has been closing stores and shutting services down for about two years now.

From the senior management, they aren’t shutting down, rather they are reinventing and re-imagining their business model.

Sears has laid off 2,900 employees. Since they have bankruptcy protection, they have decided not to pay severance. However, senior executives will continue to receive bonuses. There is now a whole movement on to “Boycott Sears.”

In the midst of this, the web team at Sears is desperately trying to drive sales. So every day I get an email — and I promise these haven’t been vetted through a critical communications process.

Maybe by finding a new job, like 2,900 employees at Sears will be forced to do!

“Go ahead, stay home,” one email encourages me. I can only imagine a recently laid-off employee getting this. We went in to Sears recently and the salesman told us he’s been selling vacuums at Sears for 37 years. Imagine his engagement when he knows his co-workers have received emails like this!

Another reminds me that the majority of laid-off retail workers are probably going to be women. This email arrives the day employees find out they won’t get severance.

The media sense blood in the water. People are upset. Coverage in all the major newspapers, prime time on TV. Outraged employees talking about a lawsuit. Then marketing sends these emails.

Now for a regular store, going through a regular time, these aren’t bad emails. They aren’t appropriate for a company on the verge of collapse, laying off 2,900 employees and closing 59 locations.

I have tremendous sympathy for these workers. I spent over 10 years in retail. Retail workers come in every day and smile at customers. I’ve seen many retail stores go down and met many of the workers who were laid off. It isn’t fun. This is insensitive.

So when you find yourself in a crisis situation, read everything with the eyes of your biggest critics and your concerned fans. Run it past communications. We won’t “tees” you for taking a sober second look.

What does the tee say? Boycott Sears?